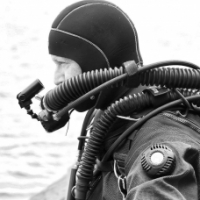 DiverBob Posts: 1,027
2011-11-14 14:18 edited 2015-06-28 17:57 in Robotics
I've started the design work on my next creation which will be a bit different than the last few I've built. This robot will be a Hexapod based on a circular body. Each leg will have 3 drive motors and will use a design similar to the old Odex I (look it up if the name isn't familiar!). All moving parts will be on bearings or bushings, there will be 24 per leg. Linear actuators drive two axis and the third uses a large gear motor.