WBA Consulting Posts: 2,929
2011-08-14 21:47 edited 2018-01-04 05:30 in Robotics
This thread will contain all the code and details for the handheld GPS that I had on my table at UPEW. I have been meaning to post this for others to have access to the code and just kept forgetting. Let me start by stating that 100% of the code was created and/or compiled by forum user Abel for his handheld GPS. He has since moved on to iPhone programming, but I was able to get him to dig out the code from his archives and email it to me.

[post=711079]Abel's Handheld GPS[/post] consisted of a Propeller Demoboard, Serial GPS module, and the 4DSystems uOLED-128-G1 in a case with four AA batteries.

His code works very well and utilizes 7 of the propeller's 8 cogs. He stopped working on the code before he implemented the serial input from the keypad, so the destination coordinates are hardcoded in the code so that the directional/distance calculations can still work.


Attached is the zip file that Abel sent me that has all of his code for the GPS. There are helpful comments here and there. The program I have loaded into my unit is the "GPS_uOLED II.spin". Also in the zip file and attached here, is a schematic that he threw together for what would have been his second version using a Propstick USB.

The code refreshes the display by doing a full screen erase and full screen write, so there is a noticable screen blanking once every 2 seconds. Obviously this could benefit from some optimization. Also, updating the code with working keyboard input would allow you to input destination coordinates on the fly which would make this ideal for Geocaching. 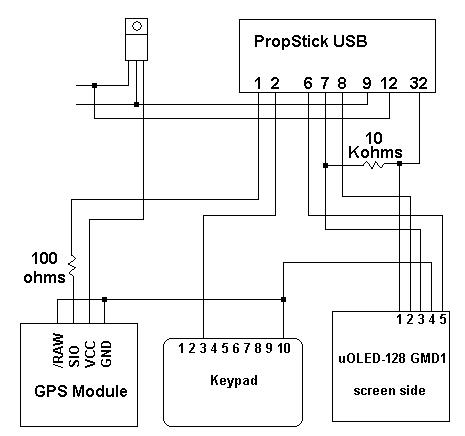