This project started after seeing this web page about an arduino based Reverse Geo Cache box. It was given as a wedding present. It simply gave the person a distance from the target position to enable triangulation of the desired spot. The concept is rather ingenious and clever. I thought that it would be a really cool idea for my wife's upcoming 35th birthday. I managed to sell several of my surplus computers to fund a new laptop that would be perfect for a briefcase sized version. So, here goes......

The case is an aluminum briefcase (used to be a portable thermostat demonstration setup) that has surfaces made from sheet aluminum backed with 1/8" fiberboard and 1/8" foam. The sheet aluminum was easily cut free-hand using diamond bit in my dremel tool. The fiberboard/foam was cut with a Husky razor knife. The flat surfaces of all sides except the bottom were painted by my mother-in-law with oil paints in a woodlands style camouflage. The 3" square Geo-Cache Logo was free hand painted by my sister-in-law. The inside of the bottom was lined with a burgundy fabric and two velcro straps to hold the slipcase holding the laptop. The board used to cover the electronics in the lid was cut to fit snugly and the masterpiece on it was painted by my 3 year old daughter. The display "window" on the front side was cut from a piece of non-glare polycarbonate type material. After cutting the rectangle in the case to fit the GPS module and uOLED display, the polycarbonate was attached with 3M VHB tape. The protective mylar on the top of the polycarbonate was cut down to the size of the display and completely painted over. When the paint was dry, the remaining mylar was removed, leaving a clear window the size of the display. I wasn't expecting everything turn out as well as it did, but I had a lot of help. 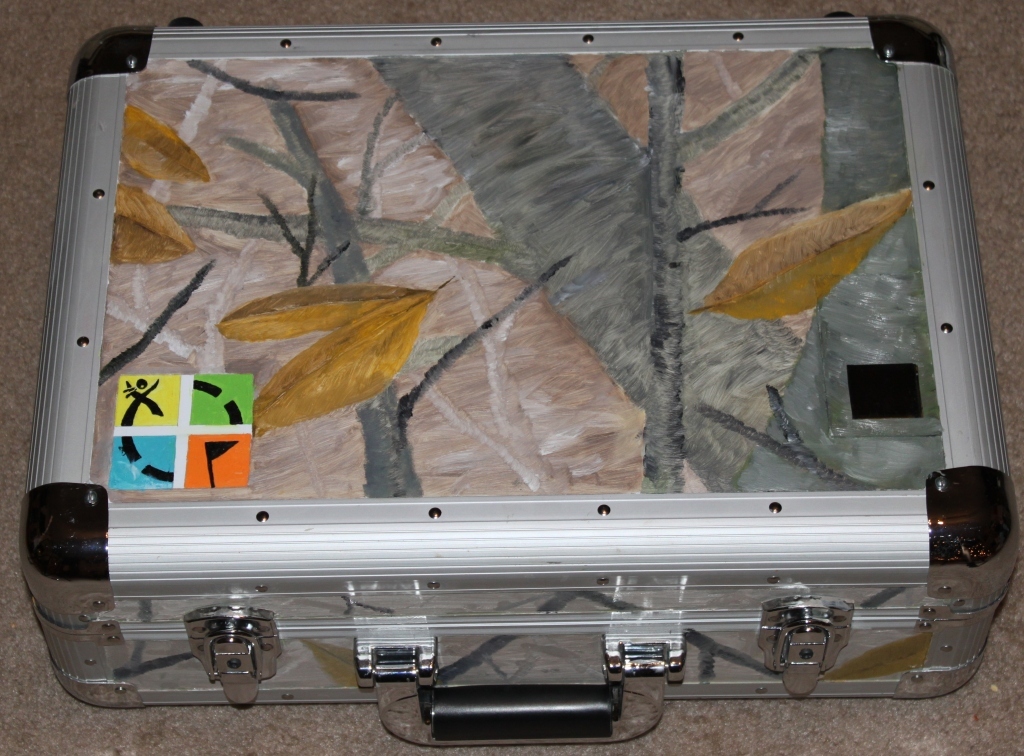 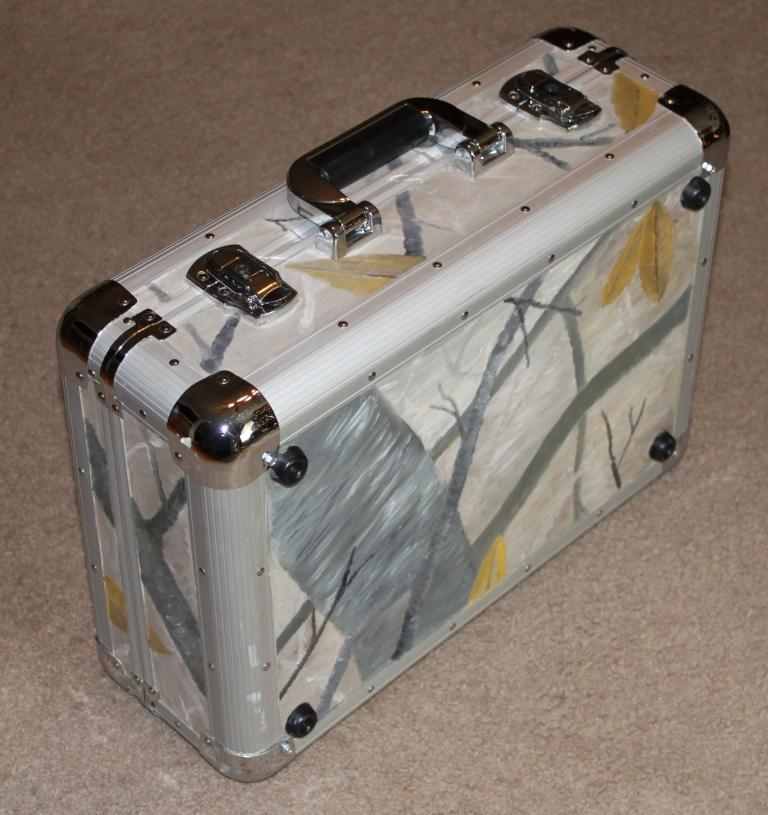 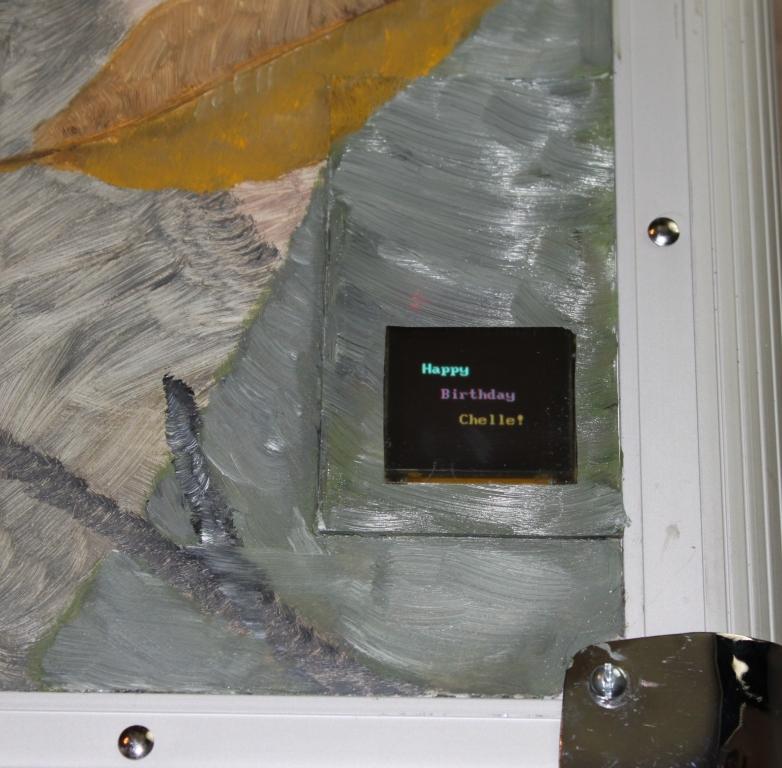 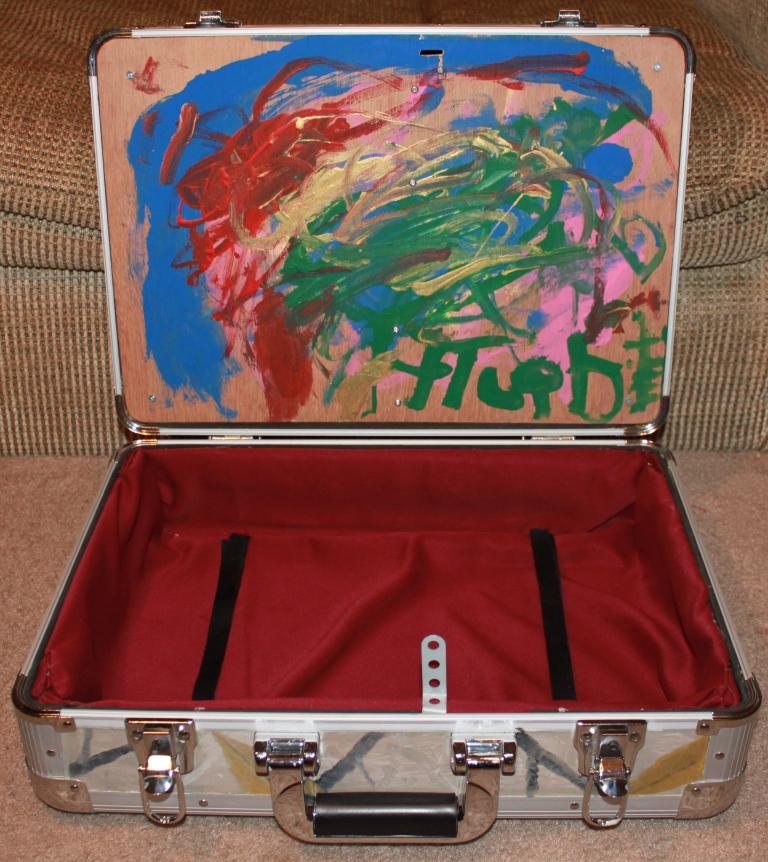