How do I run P1 Tachyon5v7 without a terminal or SD Card? 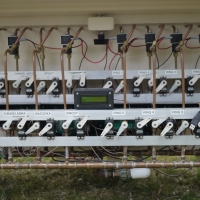 Please point me to examples of how a spin method can pass messages to and from Tachyon5v7 on a P1 with no terminal connected. I have seen examples of reading from an SD Card, but I am interested in issuing commands between PUB/PRI methods and Tachyon5v7.