I recently wrote a MPU6050 driver for spin2 and get great data from it, however, whenever I go to calculate the Pitch & Roll angles from the gForce, it returns unexpected values.

When I compare the code in Visual Basic it gives the correct angles so I wrote a simple example spin2 program with hard coded values to calculate the angles laying flat on a table. It was expected that a gforce [X,Y,Z] of [0,0,1] would return 0 deg Pitch and 0 deg Roll, however the output value for each was 14.323943 degrees.

Both Pitch and Roll use the Atan2 function and it would seem the issue is there. This project uses a v2 of BinFloat acquired via another post as the OBEX version was out-dated and will not compile without modifications.

Also sending -1.0 as a float with BinFloat to serial comes out as -4. A few issues reside in this module. 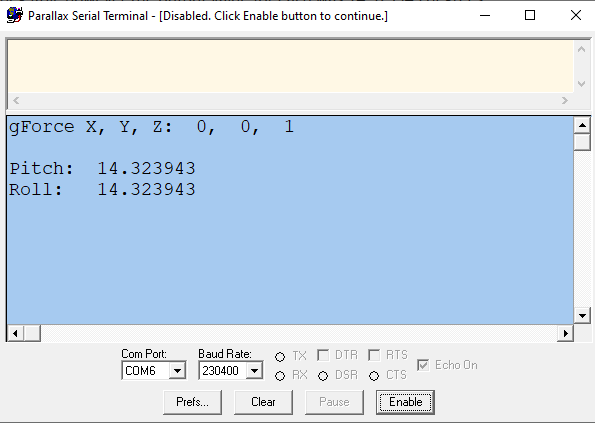