Most people think of a set point as just the output of a motion control application, like a G-code interpolator, but it can be anything, like the mouse x,y coordinates here, or a BNO085 IMU, or a head tracker...

I think it is really neat in how well it follows the mouse motion, and how little code and processor overhead there is!

The count of the Step/Dir that gets output by the P_NCO_DUTY is kept track of by a P_REG_UP_DOWN
counter.

The bigger the magnitude of the position error, the higher the pulse rate out of the NCO.

This kind of reminds me of a digital version of a velocity loop regulated by a power op amp with feedback from a motor tach....
I'm guessing than when @cgracey put step/dir counting as a smart pin function, he was thinking of a use like what I'm doing here...

This would be great for a educational lab, because of the concepts involved, low cost of hardware, and the fun of seeing the stepper motors chase the mouse positions.... I smile every time I play with it...
It could also be implemented purely in spin, with a 1mSec interrupt?? maybe? @JonnyMac would have fun with this.

I used the "garryj" USB mouse demo (I hacked a lot of stuff out) and his "1CogKbM" objects for x and y set points to follow.

I'm using A4988 stepper driver boards in an Arduino stepper shield running from a 12v supply for the steppers and 3.3v from the propeller to directly power and interface to the A4988's and the Arduino shield. No 5v level shifting needed.
It's set for 1/16 micro step mode, giving 3200 steps per rev.

I'm working on a closed loop version that reads a quadrature encoder instead of the step/dir counter smart pin for "feedback"... 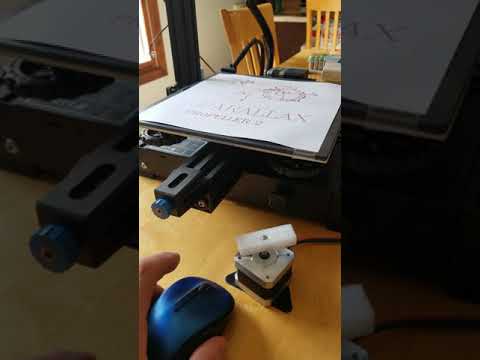