Attached is a demo program in SPIN for drawing text, lines, boxes and circles.
Samples for a round clock and a digital clock are also shown (not accurate and no adjustment method) just for proof of concept.
I have added delays in the LCD driver which may or may not be required.

The demo program runs samples of each type, ending in the digital clock. This can be used as a driver for the LCD.

You will need to change the "lcdInit" call to select either the red pcb or black pcb version as they are different.

These LCDs can be had for ~$4 on eBay. The LCD is known as 1.44' SPI 128*128 V1.1 and comes in red pcb and black pcb versions. The ILI9163 is the IC used (or compatible).
The LCD is often referred to as a Nokia 5110 color replacement but the similarity is only regarding the SPI interface, not the register set! 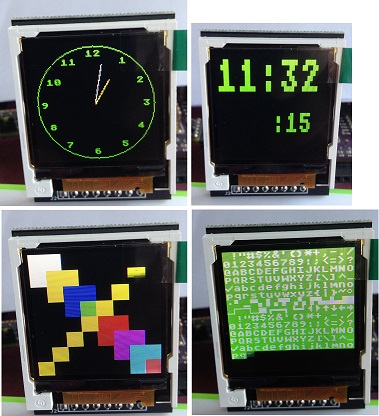