I wrote a Perl script to display the raw image data on my PC. Here's a video that demonstrates the unit capturing the heat from my hand and also from a hot soldering iron:

In the video, I've expanded each pixel to a 3x3 array and interpolated the eight outer subpixels to give a smoother image. Although the resulting 48 x 12 image doesn't contain any more information than the 16x4 image, it does look nicer (i.e. less jagged).

Anyway, so far, so good. Correcting the raw image data for gain, offset, die temperature, etc., and converting it to actual pixel-by-pixel temperatures is the next step. The math to do so is a bit hairy, though, involving fourth powers and roots. This may be one case where I succumb to using floating-point math. Also, I want to be able to display the image directly to video and VGA, rather than depending on a PC. Being able to overlay the image on a video feed would be nice, too, although that would have to be done in grayscale, not color. 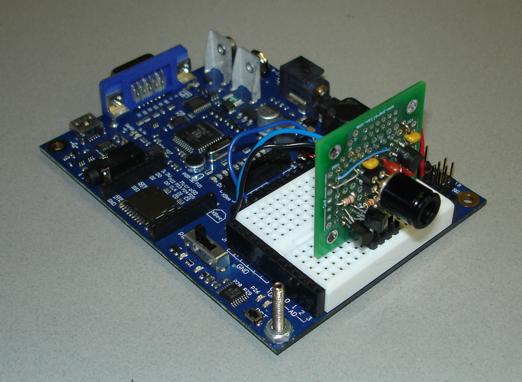