Phil Pilgrim (PhiPi) Posts: 23,057
2011-10-18 20:24 edited 2013-07-08 22:34 in Propeller 1
In a previous thread, I presented a grayscale NTSC image capture program for the Propeller Backpack, along with a hint that color capture might be possible. Indeed it is, with the same circuitry. The only thing I changed was to replace the 330-ohm external resistor with 560 ohms.This permits a lower gain for the sigma-delta ADC, enabling it to capture more detail from the chroma burst at the beginning of each line. Here are a couple of the images I've captured from the system:

For years (literally), I was was hung up on the notion that you needed to gen lock to the NTSC color burst to make color capture possible. I know now that this is not necessary. Borrowing from the work I did on the Propeller AM receiver, I realized that all that was necessary was an I/Q demodulator (i.e. synchronous detector) to sample the color burst at the beginning of each line at the chroma frequency (3.579545 MHz) and then again for each pixel in the line. Once you have the I and Q components of each, you can compute the chroma (I and Q in the YIQ color space) from the equation:

To sense the i and q components of each color burst and each pixel, I created two clock outputs at the chroma frequency, that are 90° out of phase. Each is combined XOR fashion in a logic mode counter that serves as a mixer/demodulator and sums the response over the programmed integration time. I chose four chroma cycles (i.e. two pixel widths) as the integration time, with I and Q staggered two pixels apart so I could do the chroma detection in one cog. This does result in some chroma smearing (evident in the above images), so I might split the I and Q demodulation into two cogs, so that each samples just one pixel's chroma at a time, without staggering samples.

Anyway, I just wanted to provide an early preview of what I've been working on. Neither the Spin source, nor the Perl analysis and image-generation code are "forum-ready" yet, but they will follow in the days to come. 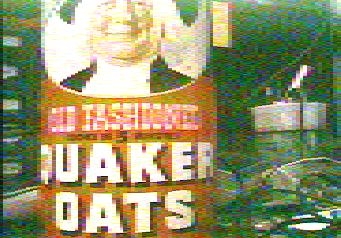 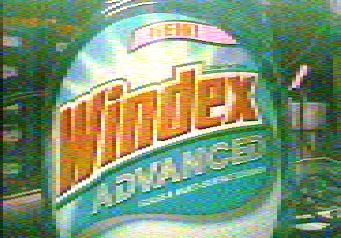