I think I know how to do what I want but I'm hoping some of you will see a better way of solving this problem.

I'm hoping to order all the parts I need today. My goal it to have this project finished and shipped within a week from today.

My in-laws are old. They both use walkers. They still live at home and would like to continue to do so. There children (they have eight) take turns visiting them and regularly stay the night with them to help with basic needs.

Their children sleep in a room a relatively long way from my in-laws' bedroom. My one sister in-law left walkie-talkies with them so they could use them to call their guest in a time of need. The walkie-talkies are too complicated for my in-laws (too many buttons to choose from).

My plan is to make panic buttons that can be in all the rooms they normally use. I also plan to purchase several of these FOBs. I recently wrote an object for the Propeller for these Nordic modules based on Leon's C code.

I'm hoping both in-laws will wear the FOBs (necklace style). I'm pretty sure they wont always have the FOBs with them so I also want to use Panic Buttons. I plan to have Nordic modules in each panic button.

I'm not quite sure of the buttons I'll use. Here's my short list.

http://www.sparkfun.com/products/9336 I like the red but these are longer than I'd prefer.

http://www.sparkfun.com/products/9181 Because they're cool and I haven't needed them for any other project. I also think it looks more impressive than the other button so it might be more comforting (because surely something important will happen by pressing that button).

I plan to have a button on top of some sort of enclosure, with LEDs to indicate the status (green for ready, red flashing for pressed, and maybe flashing red and green to indicate someone is on their way). I think I also want to include a small button or switch to reset the system (the reset should propagate wirelessly to all devices).

I'll have a Propeller board and a Nordic transceiver in each device.

There are probably less expensive uC that could do this but I only know how to program the Prop. I don't want to take time to learn to use a different uC. The FOBs use an ATtiny24, but it come preprogrammed.

In the guest room I'll want a master receiving unit (MRU so I don't have to keep typing it). The MRU would be able to reset the system. It will have a piezo buzzer to wake up anyone sleeping. I'll use LEDs to indicate which button was pressed with a label indicating its location. An probably a button to indicate they've seen the alarm and are on their way.

I ordered a bunch of cheap Nordic modules from ebay but they haven't arrived yet. I'll probably order a bunch of the SparkFun modules (I've used these before).

As I write this, I've had the thought that all panic buttons should have some indicator of which of the buttons had been pressed. This way if the guest isn't in the guest-room they will still know where to look for the activated button (and their parent in need of help).

I might also want a piezo in each button. I don't think I'd want the alarm to be loud or to continue very long. I don't want it to add to the fallen person's stress. Maybe a mild chirp to let them know the button press registered an is still working.

I'm not sure what to use as an enclosure for the buttons. This is a picture of a button enclosure I made for another project.

I might use an even wider end cap so it will be nice an stable.

I'm hoping to order parts in about an hour but I'll be working on this for the next week.

I'd really like to hear any idea you all may have.

I would even consider a premade system if it did all I need and want it to. 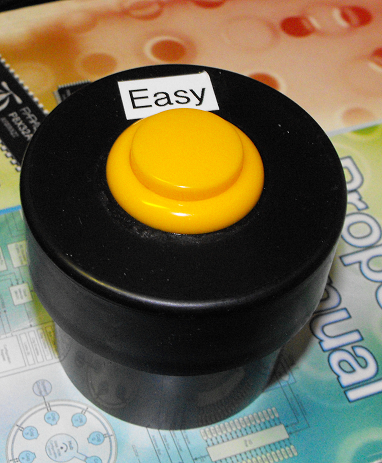