Prop Limbo! how low (power, voltage) can it go!

My test setup consisted of a DIP prop on a bread board with boot EEPROM. The brownout detector was disabled for all tests (unless otherwise stated) and reset was pulled high with a 2 Mohm resistor. Initial tests were done with a 100 ohm current shunt, but voltage drop during bootup and resolution were poor. I repeated the tests with the setup in the picture below. The extra breadboard has an op-amp transpedance amplifier that lets me use a 10 Kohm shunt in parallel with two diodes. This gives me 10mV/uA current sensativity, up to about 100uA. At that point the diodes start significant conduction and limit the op-amp voltage swing needed to supply the 1-2mA needed to boot up the propeller. ( "breadboad setup.jpg" shows my setup) I also had the Propeller pre-programmed with the "test blinker.spin" program attached below. This program switches to RCSLOW right after boot up and blinks an LED about once a second to show signs of life. (the LED was disconnected for most of the current tests)

My full data set is in the pictures. Briefly, running at 4.0v the prop and eeprom draw 9uA, with reset held low this jumps to 51uA. At about 2.0v the prop draws 1.5uA, and 1.6uA held in reset. The minimum voltage the propeller would boot with my setup was 1.4v. At this voltage current draw while running was 1.5uA and 1.55uA held in reset. After bootup code kept running on rcslow down to less than 0.9 volts, the outputs are only active down to 1.1v though. Also, running current jumps at 1.0v to 7.5uA.

My next test was the performance of the built in brown out reset. Details in the picture below, but the brown out detector in the propeller shows a rather large negative resistance with current consumption growing to 170uA at 1.6v. This would really cripple the low light start up of a solar powered circuit, so don't use the internal brownout on solar power. (btw, a lot of LDO linear regulators have this same problem)

Finally I tested programming at reduced voltages. With a 3.9 Kohm resistor in series with TX and RX "test blinker.spin" successfully programmed to eeprom at 1.6v. Though at that voltage 5-10uA were entering the system via the prop plug. No extra current was seen on my other successful programming test at 2.5v. 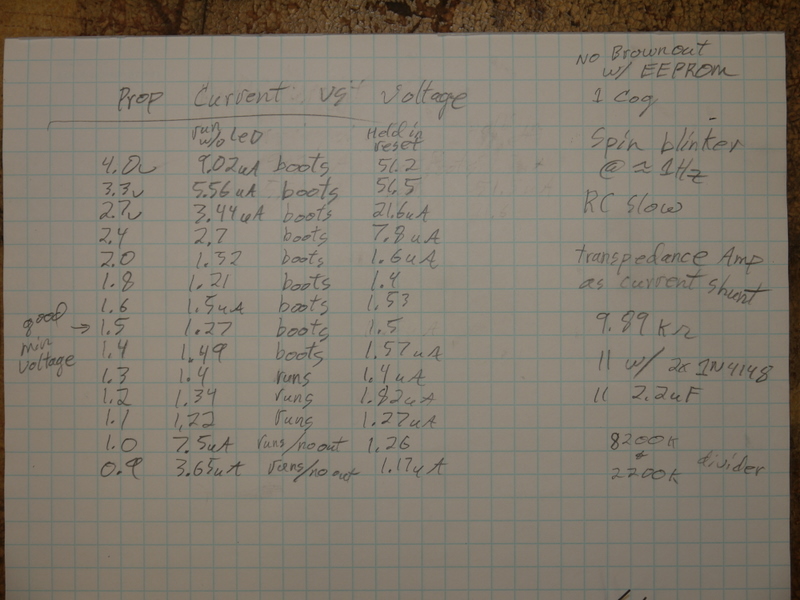 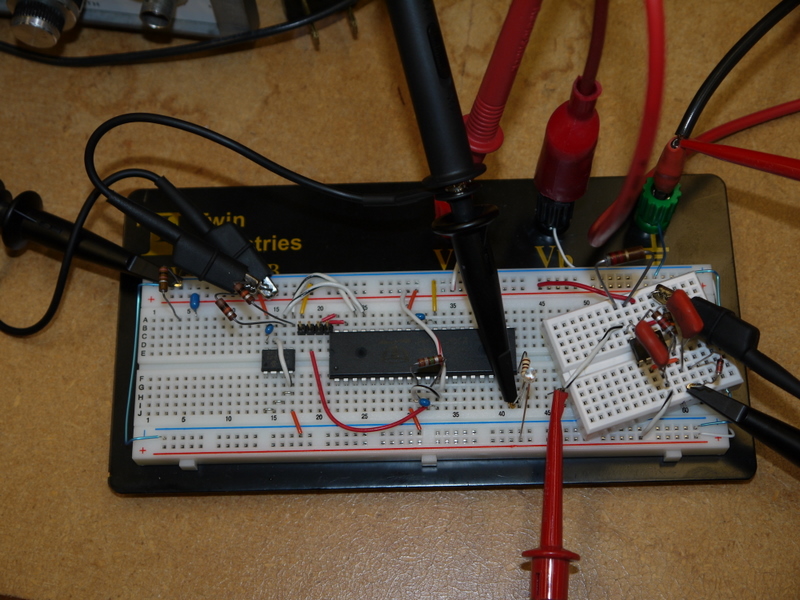