Phil Pilgrim (PhiPi) Posts: 22,847
2017-11-15 12:34 edited 2017-11-15 05:28 in Robotics
In a process that can only be described as abuse, I managed to chip a gear tooth in my new Servo360, rendering it kinda cluncky. Rather than discarding it, I realized that its internal encoder still worked just fine but would work better with a free-running shaft, which meant discarding the gear train. That much was easy to do: just remove the four long screws holding everything together, pop the gears out, and put it back together. The only tricky part was getting the middle gear out, since it's underneath the output shaft gear. But that was remedied by removing the middle gear's shaft and just sliding it out. Here's what was left: 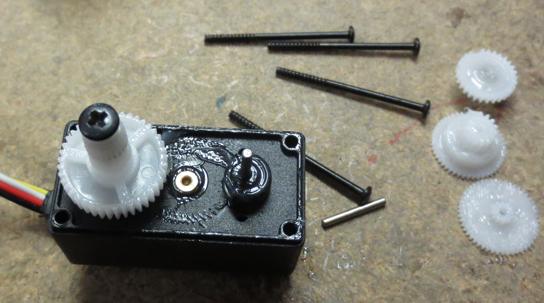 Then I thought it would be nice to eliminate the fourth wire lead, leaving a nice compact three-wire cable for the encoder. That's when things got -- well -- messy. Here's what the wiring looked like before the mods I made: 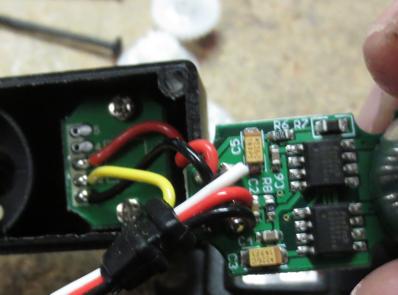 It would have been simple to remove the yellow wire and the white wire and to solder the white wire where the yellow one was. And that's what I should've done, but I had more ambitious plans. I thought it would be cool to remove the motor/driver assembly to play with later on and proceeded to remove both sets of red and black wires and to solder the ones from the cable directly onto the encoder board. After doing so, I realized that the two sets of red wires were not connected together. There's a voltage regulator on the motor driver board that provides the encoder's power. No biggie, I thought: I'll just always run the encoder on 5 volts. Then I looked at the datasheet for the Servo360, which specifies that the PWM output is 0 and 3.3V. Nuts!

But maybe the encoder can still run on 5V? I looked up the datasheet for AS5600 Hall-effect chip used in the encoder. Lo and behold! It can run on 5V. But there's a catch: to do so it has to be wired differently, along with an additional filter cap. So I checked for a tell-tale short between the chip's pins 1 and 2 and, indeed, it was there. So no chance to run it on 5V without some major surgery. Nuts, again!

So I undid all the wiring I had so patiently soldered and put everything back the way it was, except for soldering the white wire to the encoder board: 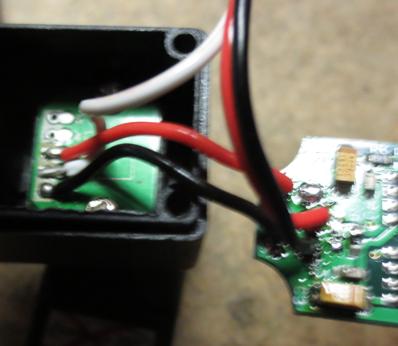 Finally, for good measure, I jumpered the original pad for the white wire to ground to keep the motor controller from responding to noise: 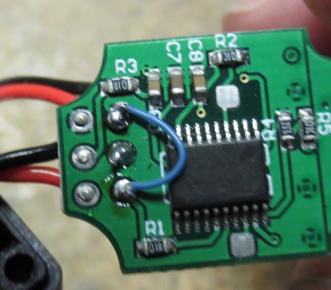 That's all for the wiring. However, since the yellow wire was completely removed, the remaining three wires were loose in the little rubber strain relief. So to remedy that, I added a dab of hot-melt glue to the inside to keep them from pulling out: 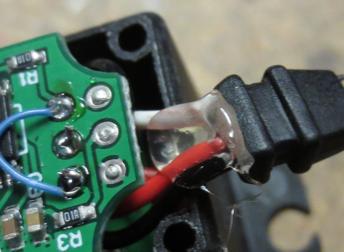 From there, it was just a matter of reassembling and testing. Amazingly it worked. Now I have a nice absolute encoder with a ball-bearing output shaft that turns freely! And it's still a bargain at the Servo360's retail price!