The idea behind my project was to create an easy way to create realistic mass trauma situations and be able to collect some metrics on how the first responder did. Everything that Ive seen before either required a lot of training of the actors (days) or were not very realistic with directions given over loud speakers or victims reading from scripts. This both costs a lot of money and time, but doesnt reflect the true chaos of a real emergency. In addition, those scenarios are always one dimensional and dont develop like a real situation (going from normal, to bad, to worst, to whats going on?).

My solution is the Triage Training System (TTS) which has two main parts. The Acting Coach is a small device that each victim wears that gives individual instructions through an ear piece on how they should act based on the injury that the coordinator selected for them while it also simulates those life signs. The coordinator can control the Acting Coach, advancing the scenario through different phases, and it also sends updates to the coordinator based on how the medics are treating and sorting the victims. Basically, the coordinator just chooses each wound for a particular victim by flipping the corresponding switches(s) sometime before the day of the simulation. The actor then shows up the day of the simulation, attaches the Acting coach to their belt and they literally become the victim just by listening to the Acting Coach while it simulates the life signs. The best part is that they never have to break character because their instructions are given through a small, unobtrusive ear bud adding to the realism. Specifically, the Acting Coach:
1) Communicates with the Coordinators Tablet
2) Gives individualized audio instructions to the actor playing the victim
3) Simulates life signs consistent with the simulated injury
4) Monitors sensors that record and transmit the paramedics actions in assessing the victims condition
5) Records and transmits what triage level the paramedic assesses them at (Dead, Immediate, Delay, or Minor) The Coordinators Tablet allows the coordinator to:
1. Simultaneously start and end the simulation for all of the participants
2. Direct the actions of the victims
3. Monitor the paramedics responses
4. Advance the simulation for more realistic, multiphase simulations that could have multiple groups of victims that would simulate multiple attacks or explosions
5. Escalate the simulation by increasing the injuries of any of the victims who did not have their wounds correctly assisted or who had not yet been treated

Attached is the project report with more information about the devices and what they do. 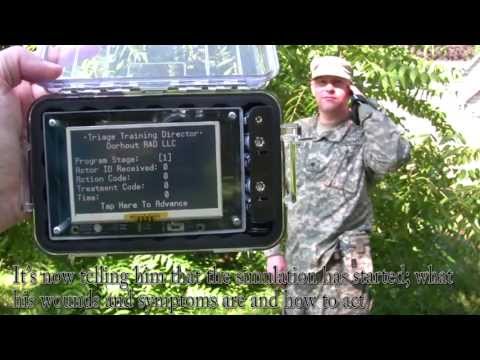 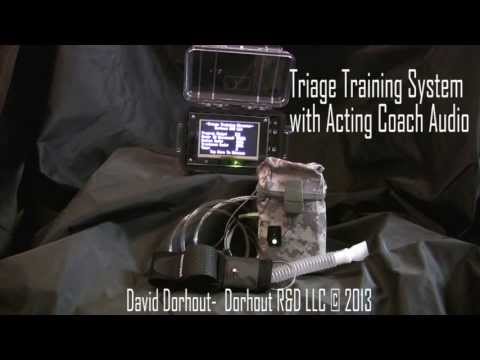