On my feet for 6 hours straight, never sat down, only left the table once for a potty break. Only took one pic, hopefully I'll get more from friends who came. Nearly lost my voice talking. Dead tired at the end, loved every minute. Plenty of interest from educators & STEM people in LA, I have lots of followup work to do there. I was in a corridor, which I initially thought sucked, but it was a high traffic area and EVERYONE came by. My area was bottlenecked many times and several times the organizers had to tell people to keep moving and come back later. Nonstop good feedback from kids & adults, woohoo.

Much of my time was babysitting fragile prototypes, so it was nice to have some bulletproof robots in the lineup to shoulder the load. The S3 was busy drawing spirograph-style flowers all day. Kids picked a marker color, stuck it in and pushed the button. Worked every time, and they could take it home with them. PERFECT! The other steady hit was the line following robots (LFRs). I had a variety of them, and there was LOTS on interest from adults & kids. Those $5 Ebay China LFRs worked great and everyone wanted to buy them. It's a shame that soldering is required, that was the only negative comment. China needs to solder them and make modular kits that snap together...

I made a wavy line around the perimeter of the table and kept 1-2 cars running much of the day. Only changed the 2xAAA alkaline batteries once. I used electrical tape for a line, but many people thought it was magnetic tape. They were AMAZED that a robot could detect a black line. Seriously. People with an iPhone in their pocket are amazed by 1950s-era CdS photocells, in 2017... ? Anyway, kids loved fooling the robot, changing the line, putting white paper over it and drawing their own lines to follow. Note to self, add a guardrail around the table next time.

Anyhow, I was amazed how popular these little, slow LFRs were. Not even a microcontroller, just analog circuitry. I think a cool exhibit/project would be to turn kids loose in a big area with a white floor, give them tape and cardboard ramps to make a track. The stock LFRs go so slow, they could almost run ahead of the robot, laying tape down on the fly. Make it a contest. Let them race and redirect their LFRs. Let them add extra batteries and bigger wheels. Voltage = speed, give them a pile of new/used batteries and a DVM and let them pick the best batteries.

Long story short, I think almost anyone could put on a very popular robot display/show with nothing but an S3 and some LFRs. Both get the kids engaged. If you have an opportunity to get involved at a fair/school/church/scout event, it doesn't take a ridiculous amount of work and preparation. People LOVE to push a button and see something happen. What's old hat to you and me is AMAZING to the masses. Face it, most people still think blinking an LED is black magic, so if you enable them to do something with a robot, it's a fantastic experience for them. 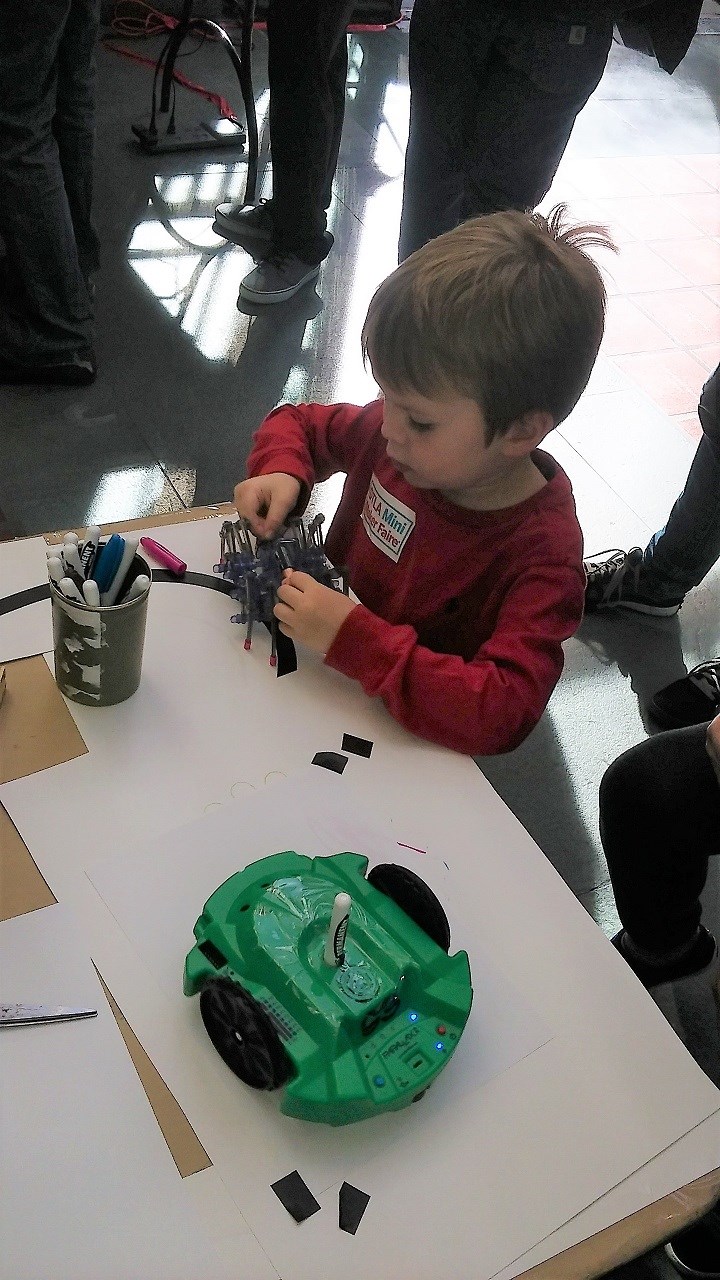